Fire Fighting System is a system of equipment used to prevent, extinguish, localize, or block fires in enclosed spaces. Automatic fire-fighting systems are installed in buildings and rooms where the fire hazard is comparatively high. A distinction is made between systems that are actuated automatically and operate according to a predetermined program and those that are actuated by an operator; the former are called automatic fire protection systems, the latter fire protection units. An automatic fire-fighting system includes a sensor capable of detecting combustion, alarm signaling devices, fire-extinguishing equipment, starting and stopping devices, and feeders for the fire-extinguishing substance; in some cases, it includes control equipment for the production process being protected. Atomizers, foam generators, and pipe nozzles form and direct the stream of the fire-extinguishing substance, which may be a liquid, foam, powder, or gas. Fire-extinguishing substances are fed into the system from a centralized supply, such as a water supply, or from self-contained or combined feeders.

The most widely used systems employ water (sprinkler and drencher systems), carbon dioxide, aerosols, or powders. Asprinkler system consists of a grid of pipelines located on the ceiling of the room, with sprinkler heads attached to the pipesby threaded connections. The opening of a sprinkler is kept closed by a disk held in a closed position by a thermal lock. Ifthe room temperature rises to a specified point, the lock is destroyed and the disk opens, admitting water to the room.

Drencher systems, which use nozzles without thermal locks, are actuated either by a sprinkler installed in a trigger air line orby a cable-type thermal lock. Automatic fire protection systems are classified according to the time elapsed between the start of the fire and the actuation of the system as ultrahigh-speed (to 0.1 sec), high-speed (to 3 sec), and standard (to 180 sec). The fire-extinguishing substance can be applied for periods ranging from 30 sec to 60 min. 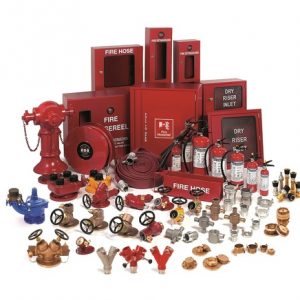 TGSI currently maintains office in the USA, with an excellent staff of professionals committed to delivering leading-edge solutions to our clients.

How To Reach Us